You can thank Hispanic and Latino/x culture for this gorgeous tool and your favorite foamy beverage.

There’s nothing quite like a cup of hot cocoa or coffee on a chilly winter day, and, for many of us, the best part is a nice, thick layer of froth on top! But do you know who created the first foamy drink? Was it a café in France? Your local Starbucks? Think again! The next time you take a sip of hot, foamy goodness, remember to thank Hispanic, Latino/x, and early Mesoamerican cultures for the invention of the molinillo! 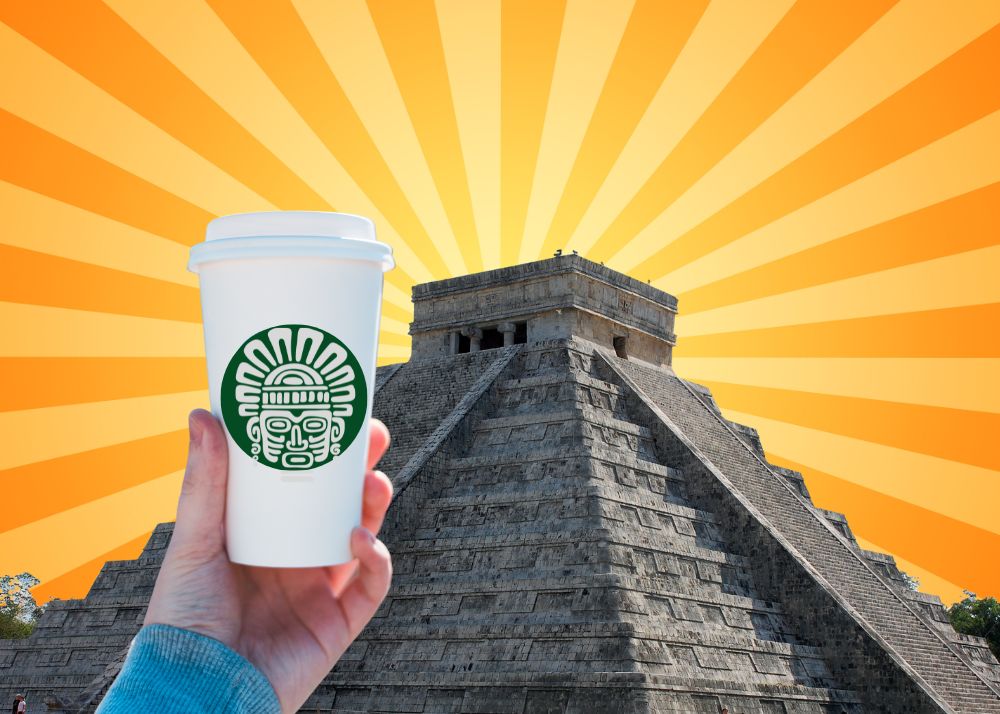 Archeologists have uncovered evidence that the native populations of Mesoamerica (what we now call Mexico and Central America) grew and consumed cocoa beans thousands of years ago – possibly as early as 1900 B.C. In the early 1500s (A.D.), not long after the Spanish colonists arrived, the Aztecs introduced them to a bitter, dark drink made from the cacao bean. The Aztecs (and the Mayans before them) made this drink by roasting cocoa beans, grinding the beans into a coarse paste, and then stirring the paste and other spices into water.

Cocoa beans are high in fat (cocoa butter), and fat and water don’t mix very well. As a result, the paste and the water tended to separate if left standing. To remix or “emulsify” the chocolate drink, the Aztecs and Mayans would pour the liquid back and forth between two containers. In addition to blending the oily paste and water back together, this repeated pouring also had the effect of forcing air under the surface of the liquid (aeration). The air would then rise as bubbles to the top of the drink and create a foamy layer on top.

For the Mesoamericans, however, this foam was more than just a byproduct of the mixing process; it was the highlight of the drink, both physically (just like it is for the many people who love foamy beverages today!) and spiritually. The Mayans, for example, considered the foam a part of the life force of the world, and they believed that drinking the foam was good for the soul. 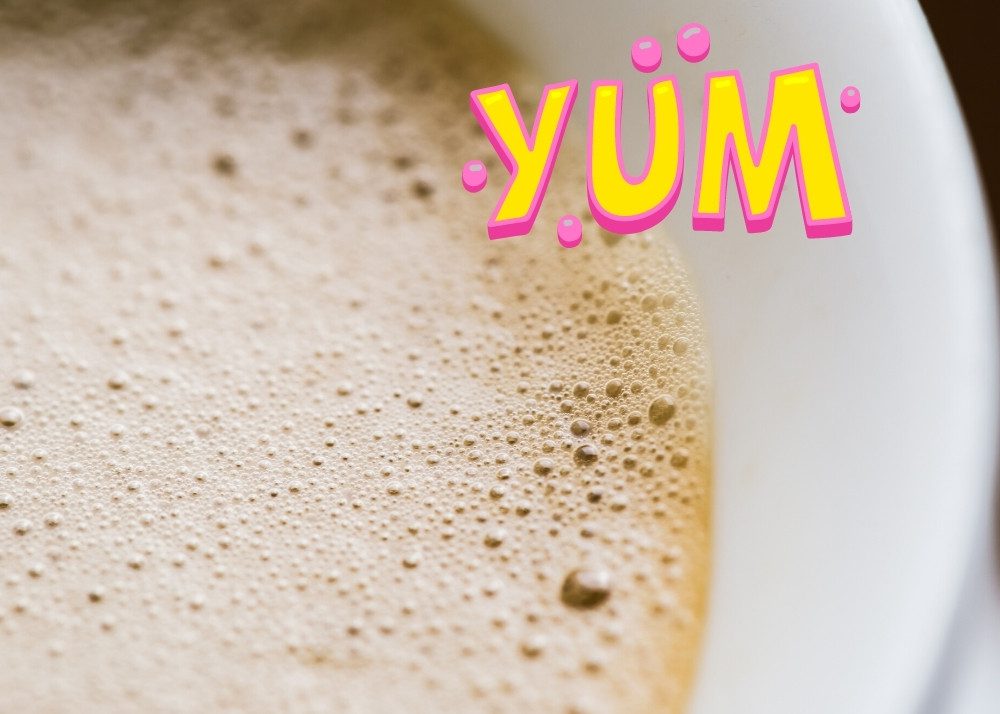 The Spanish colonists thought that mixing cacao by pouring it from one container to another was messy and inelegant. They designed an early form of wooden whisk – called a molinillo – to simplify the process. The earliest molinillos were fairly basic stirring sticks with a roundish bottom (picture a tiny baseball bat) and grooves carved into the bottom half of the molinillo. 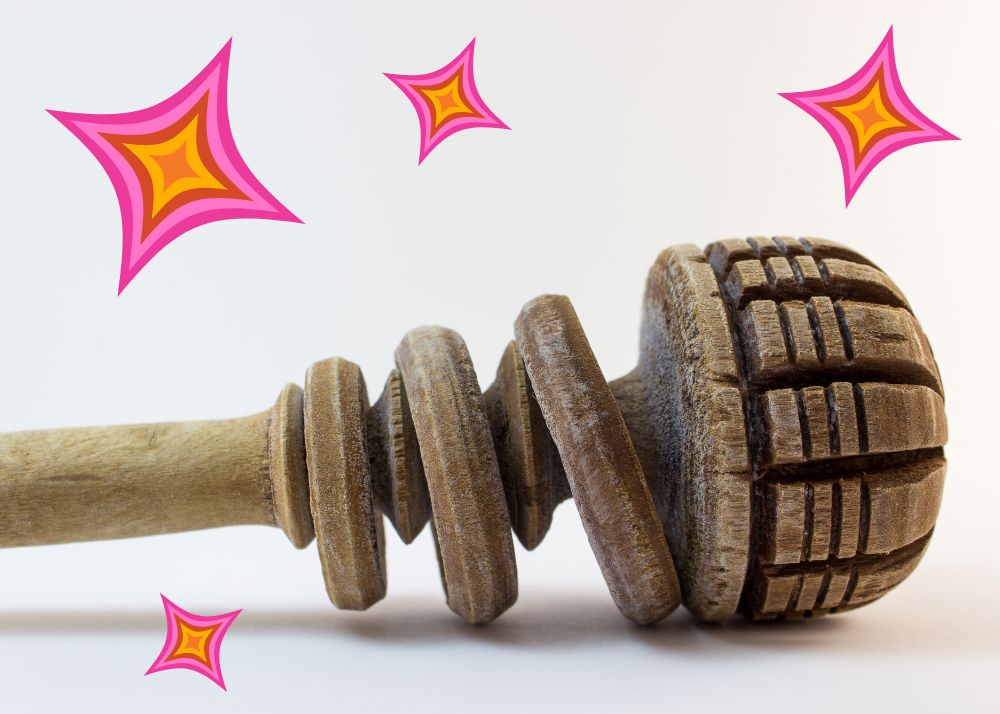 The round bottom of the molinillo was used to smash the chocolate paste against the bottom of a pot, and the grooves helped to distribute the chocolate particles throughout the liquid and add froth. Over time, molinillos became more intricate and decorative. Molinillo makers began to add more grooves, rings, and even small holes to help increase the effectiveness as well as the beauty of the molinillo. By the 1700s, molinillos had developed to look more or less as they do today: elegant, long stirring sticks with extensively carved surface features in bold, geometric patterns.

Spin Class: How the Molinillo Works

To use a molinillo, first heat water or milk in a saucepan and add a disk of chocolate. As the disk starts to melt, use the flat or rounded bottom of the molinillo to smash and start dissolving the chocolate into the liquid. Once the disk is completely melted, the fun (and exercise!) begins:

The back-and-forth motion of the molinillo slams the liquid against itself repeatedly as it changes direction in the saucepan (with the same effect as the Mayan pouring method, but hopefully with less splashing!). This slamming or “shear force” (in physics terms) breaks the cocoa into tiny particles and fatty droplets that then get distributed through the cocoa.  In addition, the twisting motion and the rings of the molinillo break the surface tension of the liquid and pull air down in between the liquid molecules to create bubbles/froth.

Getting in the Groove

Spinning a molinillo is a good workout for your arms, but it can be tiring! If you need some inspiration or distraction as you go, you can try chanting the traditional “Mexican hot chocolate” or “molinillo” song:

Tu nariz de cacahuete / Your nose is a peanut

If (for some reason) you don’t want to tell anyone that their nose looks like a peanut, you can try a slightly different version of the song that changes the second line to — Con arroz y con tomate / With rice and tomato — a reference to the preparation of a Mexican “mole” dish.

Today, you can still buy molinillos made by specialized Mexican artisans that look similar to those made in the 1700s. These artisans use electric lathes to spin the wood and make carving faster and easier, but the overall artistic process is largely the same. Using the electric lathe and specialized carving tools, the artisans create deep grooves and loose rings around the lower half of the molinillo. They add dark accents to the molinillos using a special tool that creates friction on the wood as the lathe spins. The friction burns the wood, creating black surfaces on the molinillos. The artisans then hand carve patterns and small holes into the black surfaces that contrast beautifully with the lighter, unfinished portions of the alder wood. 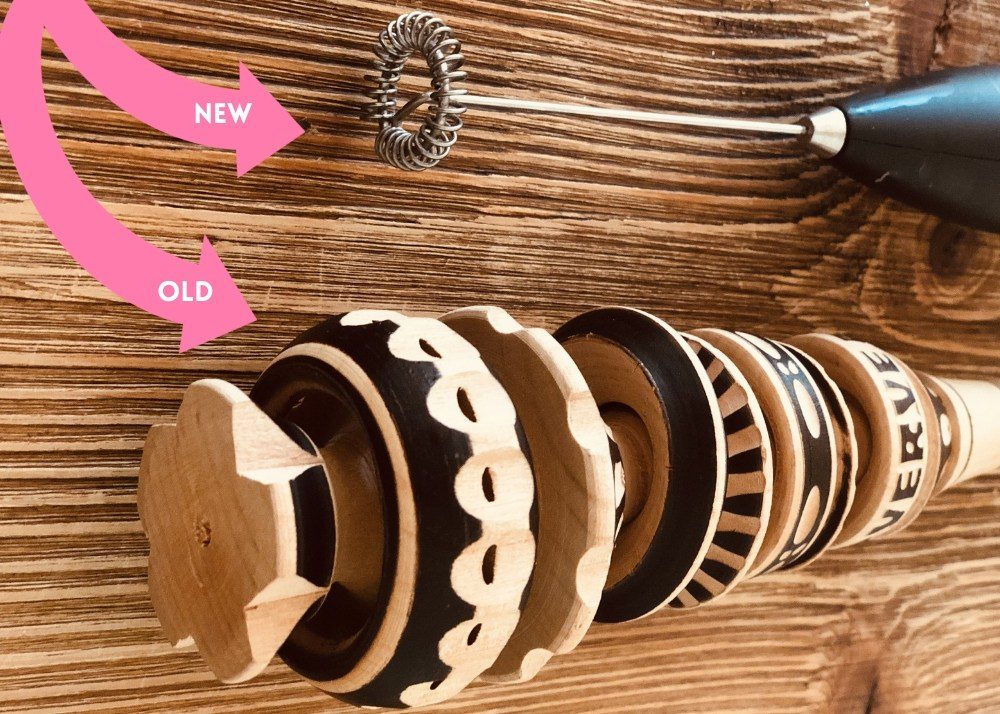 So, the next time you’re enjoying a foamy, hot cup of goodness, don’t forget to say “gracias” to Hispanic, Latino/x, and Mesoamerican cultures!